Midtown Modern is presented to you by Guocoland.It is a brand new mixed development at Tan Quee Lan Street, Bugis enclave in Singapore District 7. Consists of 1 to 4 bedroom Penthouse, Midtown Modern will stand at 20 storeys high and provide a good unit mix for property investors and home buyers who wish to have an address in the Central District 7. Being right in the heart of Arts ,Cultural and Heritage district, Midtwon Modern is situated  right in the middle of everything that matters, be work, dining, shopping and entertainment as everything is in close vicinity.

Midtown Modern has a superb address located just above the Bugis MRT interchange, giving its residents direct access with an underpass not only to Bugis Junction but also to DUO Residences and the upcoming Guoco Midtown Bay. It also directly connects to the surrounding grade A offices at City Hall, Marina Centre and Bugis Junction and brings about convenience for many commuters.

Midtown Modern is well linked by 4 MRT lines , ECP , Nicoll highway, as well as the upcoming North-South Expressway. GuocoLand will introduce a new way of luxury city living in line with the new urbanite lifestyles which demands effortless transition between living, working and entertainment.

If you are interested in buying a property located at an established residential enclave near MRT, Midtown Modern can be one of your best consideration. Call/SMS/Whatsapp us at +65 9105 9333 or fill up the contact form below to enjoy special VVIP early bird discount.

Facilities at Midtown Modern include:

Midtown Modern development is a work of timeless beauty and elegance. From the impressive lobby to the sophisticated interiors, the spaces evoke a sense of welcome and poise, with a material palette that is refined and stylish. The minimalist, straightforward rectilinear spaces, though deceptively simple, become extremely flexible in their multiple adaptations for one’s living, working, and entertaining options.

To find out the distance or time taken to travel from Midtown Modern to another location or vice-versa, click on either “Directions to” or “Directions from” and enter the address, name or postal code. You may choose from 4 different mode of the transportation provided – By Car, Public Transit, Walking or Bicycling, and select the most ideal route suggested by Google map.

To restart the whole process, click on “Reset Map”. You may also explore the surrounding of Midtown Modern through the interactive “Google Street View” by dragging the “Human” icon to any of the highlighted road. 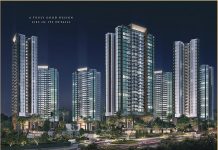 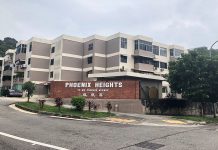